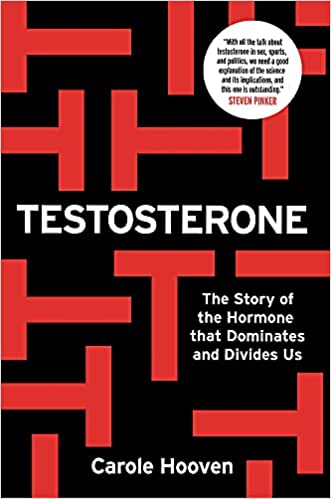 Testosterone: The Story of the Hormone that Dominates and Divides Us

The biological source of masculinity has inspired fascination, investigation and controversy since antiquity. From the eunuchs in the royal courts of ancient China to the booming market for ‘elixirs’ of youth in nineteenth-century Europe, humans have been obsessed with identifying and manipulating what we now know as testosterone. And the trend shows no signs of slowing down. Thanks to this history and the methods of modern science, today we have a rich body of research about testosterone’s effects in both men and women.

The science is clear: testosterone is a major, invisible player in our relationships, sex lives, athletic abilities, childhood play, gender transitions, parenting roles, violent crime, and so much more. But there is still a lot of pushback to the idea that it does, in fact, contribute to sex differences and significantly influence behaviour.

Hooven argues that acknowledging testosterone as a potent force in society doesn’t reinforce stifling gender norms or patriarchal values. Testosterone and evolution work together to produce a huge variety of human behaviour, and that includes a multitude of ways to be masculine and feminine.

Understanding the science sheds light on how we work and relate to one another, how we express anger and love, and how we fight bias and problematic behaviour to build a fairer society.

‘One of the most compelling books on human behaviour I’ve ever read. Testosterone is a scientific mystery story told with insight, intelligence and panache.’ DANIEL GILBERT, Edgar Pierce Professor of Psychology, Harvard University, and author of Stumbling on Happiness

‘Science writing at its best: intriguing, personal, bold, persuasive, and most importantly, transparent. Her gripping account will fascinate, whether you’re a teenager in the throes of puberty or are just curious about the nature of sex and gender – one of the most important debates of our time.’ RICHARD WRANGHAM, author of The Goodness Paradox

‘A fascinating, brave, and brilliant book – the best I’ve read on the topic.’ STEVE STEWART-WILLIAMS, author of The Ape that Understood the Universe

‘A superb and engaging book that delivers the unfiltered truth about testosterone, sex and sex differences, told with clarity and compassion.’ DANIEL E. LIEBERMAN, author of Exercised

‘With wit and warmth, Hooven lucidly lays out a formidable scientific case for how and why the sexes are different. Boldly confronting contemporary gender issues, Testosterone speaks directly to why getting human nature right matters for making the world a better place.’ JOE HENRICH, professor of Human Evolutionary Biology at Harvard University and author of The Secret of Our Success

‘An approachable introduction to an often misunderstood aspect of human biology.’ Publishers Weekly